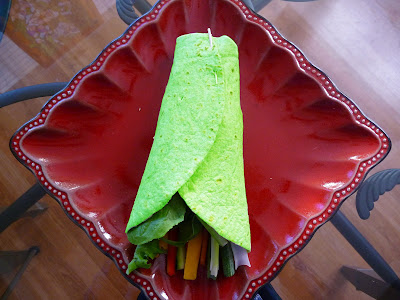 Why do I hate wraps? Because they are nothing more than trendy, moved-to-the-O.C. fancy food, while all the while denying their humble, ethnic parentage. A rose by any other name is still a rose, but a wrap by any other name is still a burrito. Yes, dear reader, a burrito. You can stuff it with caviar or foie gras, and it will still be a burrito (that dresses like a bimbo).
Ever the voice of reason, Rob, an Australian friend, cannot wrap his brain around my antipathy toward this seemingly innocuous dish. Having lived in Europe, he contends that wraps are an American take on French crêpes, or something of the sort. Therefore, I decided to conduct some “research” of my own. I found a 2003 Williams-Sonoma catalog which featured green spinach and red sundried-tomato flour tortillas, manufactured just for them by a “Mexican émigré”*, which are perfect for, you guessed it, wraps.


Upon consideration, perhaps it is not the dish that I hate as much as the word itself. The word wrap, in one of its verb forms, means, “To fold or roll something up into a compact bundle.” With a flexibility typical of English, wrap has now morphed into a noun that is remarkable only for its asinine ugliness—how prosaic it sounds, how utterably devoid of even a little bit of poetry. Can’t someone come up with an elegant, more creative name for the burrito’s mutant offspring?


May I suggest an alternative name, something that gives a quiet nod to its Mexican roots while at the same time satisfying the linguistic whims of the wrap’s upscale admirers? How about Asno (ahs′-noh)? I would like a red sun-dried tomato asno with prosciutto and basil sounds so much better than I would like a green spinach wrap, don’t you think? It sounds so very Italian, like the Arno. Besides, asno and burrito both mean the same thing (see the bottom of this page).
Tonight, I think will take myself to my favorite hole-in-the-wall taco joint and will enjoy a simple, yet delicious burrito of tender pork carnitas with green tomatillo with chile serrano and cilantro salsa together with a slice of panela cheese and fresh pinto beans de la olla, washed down with an icy Pacifico beer. Others can eat their expensive, stone-cold wraps, er, asnos if they desire.
So, if a friend were to offer me one, would I refuse it? Most certainly not—I would hate to hurt her feelings. Who knows? I just might like the little green monstrosity. Now, would I ever tell you if I did? Not at all—I’m keeping that under wraps.
*“Mexican émigré”? It "gives a certain elegance to misfortune”, doesn’t it? 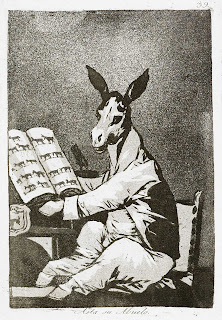 Once, whilst watching the tele, I heard a woman describe her wrap recipe as follows: "Take a wrap, add pork carnitas from your Mexican deli, add salsa . . ." Heresy! Heresy!

I hate wraps too. I refuse to eat them! Are they considered different than burritos because they are served cold? I once went to an Indian restaurant and used Nan as a tortilla with the Curry. Is that a wrap or a burrito? :)

Clementina said...
This comment has been removed by the author.
Saturday, September 20, 2008

Neither. It is clearly not a burrito, but a WRAP? Nunca. Is a burrito different from a wrap because wraps are cold? Since I find cold tortillas particularly unappetizing--let's hope so!

Thanks for this post. I'm scouring the Internet to make sure it not just me that hates wraps. They are like the beloved burrito, only cold, dry and all together unappetizing--no matter the artificial coloring!

I hate wraps too. I can't get them down my throat!

Wraps are evil. But what about when so-called burritos turn out to be just wraps in Mexican garb? Now that's unforgivable!

I agree. As unforgivable as a wolf in sheep's clothing--only it tastes worse!

I found this blog because my distaste for the whole "wraps" concept became so overwhelming to me, I was compelled to seek support by conducting a google search for "hate wraps". Wraps are HORRIBLE burritos. Those cheap grocery store tortillas taste like wax when they are cold, and are even worse when stuffed with "lunch meats", or cold roast peppers and cream cheese, or any other filling that might be decent on a slice of toasted, good grainy bread. Good flour tortillas taste great when they are heated and used as intended — as burritos. I am a white guy, but I have to say — white people can be SO LAME! What's the matter? "Burrito" sounds too frighteningly ethnic? Let's call them wraps! We'll sell a billion of them! It smells like Wallmart to me.

Upon consideration, perhaps it is just as well that these unappetizing concoctions be called "wraps" lest the name of Burrito be forever besmirched.

At least it hasn't suffered the same fate as that French classic, the quiche lorraine. Here in America it has become a souped-up version of its former self, stuffed to the gills with all kinds of stuff. My French friend likes them, but refuses to call them quiches. And here is the final indignity: they are still called quiches by everyone (even me).

So let the wrap have its ugly name. In time, like all other ugly foods, it will go by the way of the dinosaur (let's hope!)

I hate wraps because they are imposters, inauthentic. A quote of mine concerning my craftwork applies "just because you can, doesn't mean you should" viva la synchronizada!

Wraps?! ¡Ni lo mande Dios! They are just plain gross! Flavored tortillas with cold stuff in them. When wraps became the rage, I remember going to an informal luncheon where I work and what was on the menu were turkey wraps. Deli turkey, romaine lettuce, cheddar cheese, chipotle mayo inside a cold flour tortilla. Looking at the wrap hurled me back to the first grade, when I had to eat macaroni and cheese for the first time in my life. I became very upset because I could not eat any of that yellowish-white glob on my tray and I was so hungry. I ate my green beans and the cling peaches that were for dessert. It was a traumatic experience and here it was repeating itself when I saw the wrap.

Lighten up! Food, like language is always evolving, and trying to pin it down like a dead butterfly is a fool's errand. Wraps are not called tortillas, nor are they always served cold. Sometimes I uses them for chimichangas, as a change--no need to get all religious about it.

Hola, Anonymous!
Perhaps you haven't noticed, though it is obvious to most, but this post was written with my lengua-firmly-in-cheek.

(And now that you have bestowed upon us your pearls of wisdom, will you courageously reveal your identity?) :^)

Guacalas! Eating a cold tortilla is like eating an Ostia, a church cracker, if you will. 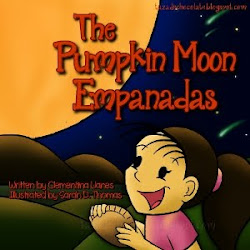 "Clementina Llanes transforms food not only with her extraordinary culinary skill, but with the poise and beauty with which she writes about them."--NBC Latino--Food Blogs We Love.

MUCHISIMAS GRACIAS to Latina Magazine for the mentioning my little blog in its Ultimate Latina Toolkit.

I HAD THE HONOR of being mentioned along with other Latina food bloggers at New Latina. There's a whole lot of good cooking going on!

Promote Your Page Too 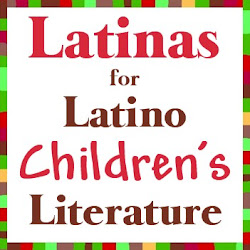 Cookin' Up Something Maravilloso

A Little Cup of Mexican Hot Chocolate by Clementina Llanes is licensed under a Creative Commons Attribution-NonCommercial-NoDerivs 3.0 Unported License.

PLEASE ask for permission if you would like to use my photographs. Gracias.